My eyes went from the clump of dried mud that just exploded onto my clean floor back up to Alisa’s backside as she beat a hasty retreat out the door, apparently unaware of the mess she had just made. I sat for a moment, caught off guard, and then looked back again at the first aid kits. I quickly dropped my pen and scrambled to my feet and stepped outside the health office door looking to catch Alisa.

“Alisa!” I called after her as I saw her making her way quickly down the hall.

“Ya?” she had turned to look over her shoulder but was still walking away, apparently in a hurry.

“When do you need these first aid kits back?” I asked.

“Well we have a group of seven campers leaving before lunch.” Alisa called back down the hall as she walked backwards.

“How long will they be gone?” I asked.

“Five days. I will be back in about an hour to pick up the kit. Thaaaaanks.” She turned and continued walking and waved over her shoulder.

Geez! I had no idea what to put in a first aid kit!? I had never packed one before! My mind was reeling again.

What does one pack in a first aid kit for seven camper for five days in the deep-dark, bear-infested Canadian woods?  I had been on many camping trips but they would not compare to one of these trips. My childhood camping trips involved a pop-up tent trailer and an electrical plug in at the KOA. This was hard-core primitive camping that these kids were embarking upon. No comparison there. These kids would be portaging a canoe on their heads and bear proofing their food at night. What if I missed a critical emergency item and the group was on day five of their ten day trip, and a little camper dude was mauled by a bear, and I hadn’t packed this incredibly critical item, and then he hemorrhaged to death!? The thought made bile rise up in my throat.

I gingerly picked up the first aid kits and took them over to the sink where I knocked the remainder of the mud dried off. I picked up the first one, placed it on the counter and unzipped it. The inside of the kit was thankfully cleaner than the outside, although I did find a stray twig and a dead Daddy long legs.

I took my time taking the kit apart. I realized it was comprised of a sea of zip lock bags and bottles. That made good sense. Imagine what a disaster it would be to have your first aid kit fall into the lake and everything inside got soaked! One zip lock was full of many different sized band-aids. There was one full of moleskin and a pair of scissors. One zip lock had rolls of gauze. Another had a couple of sizes of gauze padding– 2X2’s and 4X4’s. There was wooden splints, ace bandage wraps, a triangle sling, a bottle of water purification tablets, acetaminophen, a bottle of Imodium (diarrhea on trip…what a lovely thought), a bottle with six tablets of aspirin with codeine (hmmm….narcotics on trip…mind you it was a low dose and might help with moderate pain), one bottle of Tums, a bottle of antiseptic, a bottle full of safety pins, a tube of antibiotic cream, a tube of Silvadene for burns, a roll of duct tape, a zip lock full of q-tips, a couple of instant ice packs, a small stack of alcohol swabs, an epinephrine pen, one zip lock full of rolls of tape and on and on…and then….there, at the very bottom of the kit, in another zip lock bag, was a folded up paper. I opened it and unfolded the page. It was a list of all the requirements for the first aid kit! Whew! Oh thank you Jesus! This should make the task a little easier!

I set about counting everything out. The list was pretty specific. Eight 4X4’s for example. So I counted out what they had and then added to the contents if needed. I knew it seemed silly…but I didn’t want to leave the kit short, and yet, if you added too much…the kit would not close! It took an hour to get the two kits replenished and the mud wiped off the surface. In the end I felt satisfied with my work. I left the two kits on the counter, ready to go and then I swept all the dried mud up off the floor (thanks Alisa!). I figured while I was here I would set out the lunch time meds too. I looked up at the clock. I still had a couple of hours of chill time but first I checked on the two sick campers. Fast asleep. Sweet. I hustled upstairs and poked my head into the main office. I found Bill there.

“Oh for sure!” He responded. He was elbow deep in some kinda forms.

“I have a bit of a problem.” I proceeded to explain the problem with the dirty hands, and the need for serving utensils.

“Well…the serving utensils will be no problem. I will have Shawn put in an order for more of those. As for how to make eighty boys all wash their hands before three meals a day….I don’t know!” Bill said with a smile as he sat back in his office chair. “But, I will bring it up at the staff meeting tonight. We can have the counselors encourage them to clean their hands prior to each meal and see how that works?”

“No problem. And please keep me up to date on what is happening with the Cord Hut too. I wanna know if this continues to spread.”

I left the office and went back to my room. Time to don the bathing suit, sun glasses and grab a towel. It was break time for this camp nurse! And my break was going to involve a cup of coffee and a jump in the lake. 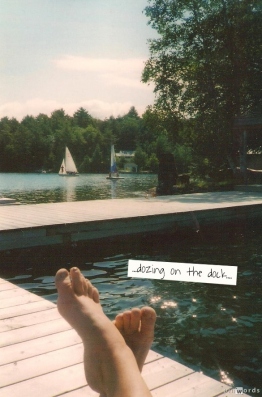