Morning meds were pretty straight forward this day. No more Deer campers with belly aches this morning (whew). Just a few extra kids with various issues including more allergies, a rash across the chest (tried some hydrocortisone cream), sore throat (from yelling the night before like a weenie — tried a Halls cough drop—this was a bad idea), and a really dirty abrasion to the knee (cleaned it out and put on a Sponge Bob band-aid—-this was a really bad idea).

One kid complained that his ear felt full. It wasn’t painful but it was driving him nuts! He noticed it the evening before and had hopped on one foot and pounded on his head to his hut’s amusement. I had a look in there and all I could see was water! It was like a small puddle in there. I managed to find some ear drops for swimmers ear (over the counter stuff) and all it took was one drop in there to break the surface tension and a small gush of water dribbled out! Down his neck and onto his shirt, much to his surprise and gruesome delight. Sweet. Huh! That was cool, so I took a look at the ingredients and the number one ingredient was rubbing alcohol! That was basically a $4 bottle of rubbing alcohol. I sent that little dude on his way with some ear plugs.

I was just finishing up, got out the lunch meds, was documenting everything when I heard a knock at the door. Amy was at the door with a large garbage bag.

“Well, Lawrence in the Deer hut, wet his sleeping bag last night. He told me his Mum talked to you about it.” She said as she plunked the bag down on the floor.

“Ooooh. Ya. He takes meds every night for that but it is not always 100% effective.”

“Well…we did have three hot chocolates just before bed. Do you think that had something to do with it?” Amy asked innocently.

Was she serious? “Very likely.” I answered with a slow nod and a raised eyebrow. “So….where can we wash that up?” I asked.

“Well we do have a ‘double top secret’ washer and dryer on camp but we have to get special permission to use it. Would you be able to ask Bill or Brian?” Amy asked.

“Sure…but why is it double top secret?” I asked a bit confused.

“I guess they figure if everyone knew about it they might use it and it would fill our septic bed pretty quickly.”

“So where does everyone get their laundry done then?” I was curious now.

“The camp offers laundry service to the counselors once every two weeks and the maintenance staff will take your laundry into town for you and run it through for a small fee. Otherwise you have to go during your weekend off and either do it in the town laundromat yourself or take it home to have it done.” Amy explained.

Didn’t sound like a great way to spend your precious time off. Then I was trying to imagine the burly maintenance staff ramming a pile of ladies intimates into the industrial washer. Ugh. The thought was not palatable. But it turned out that this is pretty much what happened on laundry days. Both camper and counselor clothing is rammed in there, regardless of color, then the staff would go off to the local Swiss Chalet or Tim Horton’s while the cycle ran. Return for the drying cycle and then go to Dairy Queen for dessert and pick up any needed supplies for camp. Not a bad way to spend the day if you were on maintenance. It beat unclogging toilets!

I could not imagine waiting for laundry day for this sleeping bag though! We needed to get this done quickly before the contents of the garbage bag got ripe in the summer heat. Also, I wanted to keep it on the DL for this poor camper. Nothing like wetting your bed at the age of 9 as a way to lose friends! Amy was thinking the same way it appeared.

“We need to get this done before bedtime tonight because if the other campers figure it out…well I have two words. Social. Pariah.” Amy said as she held up two fingers.

“Agreed.” I assured Amy that I would do what I could. I finished up in the office, gathered more first aid supplies and then grabbed the bag. As I took hold of the top I got a quick whiff of the contents which strengthened my resolve that, indeed, I needed to get this done ASAP. I hauled the bag upstairs, got changed into my bathing suit, filled my backpack with my supplies and then dragged the bag into the main office. Bill and Brian were both busy at their desks.

“Gentlemen!” I clapped my hands together once and then rubbed them together as I greeted them. They both looked up from their work. I noticed they also had a large, half filled garbage bag in the office. “I have a great favor to ask!”

“What can we do for you Anne?” Bill asked as he looked up from the computer. We only had two computers at camp and they were dial up. That was pretty cutting edge in cottage country back ‘in the day’.

“I hear that there is a ‘double top secret’ washer and dryer here at camp and I wondered if I could avail myself of it?” I said indicating my garbage bag.

“Oh boy! What have you got there?” Brian asked intrigued.

“A wet sleeping bag.” I started to open the bag to display the contents.

“No need to show us! We believe you! We believe you!” Said Bill as he quickly got to his feet and Brian waved his hands in front of his face as if to block his vision from seeing such a terrifying sight. Bill was fumbling with his master key set trying to locate the laundry room key.

“Well what do you guys have in your bag?” I glanced at their garbage bag and indicated towards it.

“Confiscated candy.” Brain told me as he finally found the key and held it up for me to see. “We have the kids hand it in when they arrive. Anything that is a ‘may contain’ has to go into the trash. So this is all the candy that must be disposed of.”

“Oh. May contain peanuts. This is a peanut free camp, so we have to look at the fine print on every package brought into camp and ensure that it does not contain any peanut products.” Brian clarified. “The food that does not contain peanuts is kept by the counselors until later in the session and then they have a party and share it with the whole hut.” That sounded like fun.

“Follow me Anne. I will take you down to the laundry. It’s true that we don’t do much laundry here but this is the exact kind of reason that we do have a washer and dryer.”

I followed Bill down the stairs and around the side of the main building. Underneath the kitchen was a small alcove. I noticed a beat up couch and a pail of sand full of cigarette butts and an empty cigarette package.

“Smoker’s lounge.” Bill waved his hand toward the couch as he began to unlock the door. He shook his head. “We have a few staff who smoke, so we let them do it here. I would like to get rid of it entirely but haven’t been successful yet.” Bill said with a look of chagrin. “It’s a popular spot and I know that some of the counselors have picked up the habit here at camp. I’m not happy about that.”

I had to agree with Bill. Knowing that the counselors made a pittance for a wage I tried to imagine how much of their paychecks went to paying for this expensive, unhealthy and nasty habit. Can’t say I would be too happy if my university kid went off to camp all summer and blew most of their earnings on cigarettes! I picked up a discarded cigarette package that sat on the couch and looked at the grotesque warning on it. Have you ever seen Canadian cigarette packaging? It was horrendous! I could not believe anyone would keep the habit up after looking at this!

Bill opened the door for me and turned on the light. The far wall had a shelf full of paints, used paint brushes, cleaning supplies, toilet paper and a huge container full of a jumble of lost and found clothing and towels. To the right was the washer and dryer set. They were the saddest set I had ever seen. I had lived in a couple of different residences at university, so I was used to communal laundry facilities. But this set looked like they had barely survived Nam…they were that old and that dilapidated. They were dented, covered in a film of dust, and drips of paint and oil. They made me feel sad. I had to resist the urge to wipe them down and give ’em a hug! I could not even be sure if the sleeping bag would come out cleaner. I actually considered just dunking the sleeping bag in the lake to rinse it off. 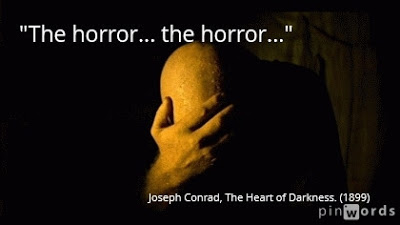 Seems like a lot of things at camp were…let’s say…’well loved’. Think about it though. You have about 100 people at a time using the facilities. Most of them are children or teenagers…so it should really not be any surprise.

Bill must have noticed my look of skepticism.

“Ya. They look pathetic but they will do the trick. I guarantee it!” Bill said as he lovingly patted the washer control panel.

“Well. Here goes nuthin!” I said as I bent over the bag and opened it up. The smell hit me like a a punch in the gut and I took a small step back. I noticed that Bill had also done so and looked a little green too. I screwed up my nose and then I put on my game face and breathed through my mouth. It was a survival technique I had learned at work. This proved to be extremely efficacious!