As I had tossed the soggy sleeping bag into the laundry I brought up the whole clean hands award with Bill.

“What is the big deal about cleaning your hands anyways?” Bill asked.
Seriously? Did no one get the connection? Probably not, I reflected, because I recalled reading somewhere in a study that they found that only 10% of people washed their hands after using the restroom. I had lots of work to do here!
I explained the connection to Bill who grimaced and nodded. He agreed that it would be a great idea. I told him I wanted to introduced the idea at lunch today.
I thanked Bill and headed out to do my first aid kit rounds. I got the boat house and arts ‘n crafts kits full to almost overflowing (I figured that way I could maybe take a day off, or maybe just do half the kits one day and then the other half the next day…always a slacker) and arrived to the kayaking and wind surfing dock.
The windsurfers were waaaaay out on the lake attempting to raise their sails out of the water. It looked like quite a struggle. There was not much of a wind that day either, so it seemed that they would barely pull up the sail out of the water, and it would fall down the opposite side, pulling them in with it. Rob was in a small boat with an outboard engine, tearing around the windsurfers barking encouragement and corrections. Meanwhile the kayakers, in closer to the shore, were a rowdy bunch. Caroline was shouting instructions as they attempted a wet exit. Muddy was in a kayak too, providing frequent demonstrations. I was intrigued.
A wet exit, it turned out, is how a kayaker gets out of the kayak should it capsize and leave the ‘yaker’ upside down in the water. Caroline explained this all to me after she greeted me warmly. It sounded terrifying. I stood beside Caroline as the campers attempted the maneuver. They actually seemed to do pretty well with it despite having to pull off the kayak ‘skirt’ (a piece of water resistant material that a kayaker wears to keep water from entering the boat) push themselves out and then swim up to the surface.
“Wanna give it a try Anne?” Caroline asked me.
“Oh! No thanks, that looks terrifying!” I said as I continued to watch in complete awe.
“Have you ever kayaked before?”
“Nope. I have done a lot of canoeing but no kayaking.”
“Well you don’t have to try a wet exit on your first day, silly, but would you like to try?  They way I figure it is if you like canoeing, you will love kayaking.” Caroline told me confidently.
“Really? Cuz all those rapids, and going upside down looks kinda intimidating… I do like to canoe though.” I answered with misgivings.
“Rapids are not a problem on the lake here. The worst you have to contend with is the waves from passing water-skiers….and Rob here.” She said as we watched Rob blow by in the boat and waves crashed against the dock in his wake.
“You should give it a try! I’m serious. It is a fantastic feeling.” Caroline signaled for me to put down my backpack and follow her up the hill to a small stack of kayaks. She pulled one out and managed to lug it down the hill and onto the dock. She put a rudder on the back of the boat that she explained would help steady it. She pointed me towards the rows of lifejackets as she found a paddle for me. I emptied all my pockets and then we carefully lowered the kayak into the water. With great effort, much terror, and absolutely no grace at all, I finally got myself into the wobbly kayak and pushed away from the dock.
The noticed that the kayak was about one-third submerged into the water when I sat down. I was so much closer to the surface of the water as compared to a canoe. I thought that I could actually feel the water coursing by underneath me! It was definitely cold on my bottom and the backs of my legs. I could reach my hand out and without any effort drag my fingers through the water. As I did so, I noticed that the kayak was not nearly as steady as a canoe! Every little wiggle, turn of the hips, or wave made me stop and grab the side of the kayak with my hand, as if to try and steady it. Like that would work! It didn’t. 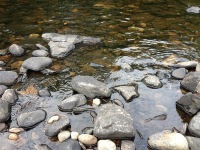 I experimented with the double bladed paddle and found myself almost turning the kayak around in a full circle with one stroke. I experimented some more with smaller, more delicate strokes attempting to keep the nose of the kayak on a straight trajectory. I gingerly peeked behind me to see if the rudder was still in place, and it was. Huh. It took some getting used to, that was for sure. I paddled myself in closer to shore, thinking if I turned over, at least I would be able to touch the bottom! As I got into the shallower end I was able to see the odd sunfish and minnows darting about in the crystal clear water. I continued to paddle along the inlet of the peninsula, hugging the shore. Further into the bay the water was placid and I hit a patch of water lilies, so I gently paddled through them trying not to rip them up. Hiding below the lily pads I could see fish, large and small, and frogs who hopped off the pads and into the water with a tiny screech as if to say “Rude! Excuse you!”
It was absolutely gorgeous! I had to admit that Caroline was right, kayaking was an incredible feeling! It was the calm of canoeing but so much closer and intimate with the water. I continued to paddle along the shore and enjoyed looking in the shallows and as I passed a tiny inlet I managed to disturb a massive Blue Heron, who in turn scared the crap outta me as he took flight. I nearly capsized! I took a deep breath and balanced the paddle across the kayak. I coasted as I watched the Heron stretch his massive wings and fly off. The drips from the paddles created sonar-like circles in the water. I watched in silence enjoying the now far off sounds of the campers, the motor boat and the occasional blow of the whistle. This was a little piece of paradise! No exaggeration. I was going to have to make this a regular part of my day if I could manage it. I turned back towards the camp dock with a smile on my face. 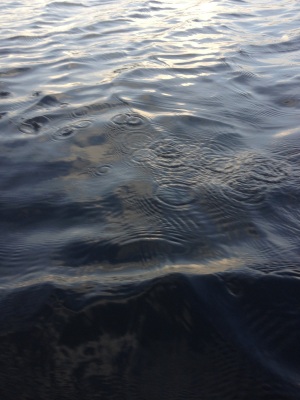 The kayaking class was now lined up side by side, paddles tucked into the boats as each camper held the cockpit of the kayak beside them.
“Anne!” Shouted Caroline from the dock. “Join us!”
“OK!” I shouted back as I maneuvered myself to pull up beside Muddy’s kayak. He showed me how to tuck my paddle inside the kayak and then he indicated where to hold on to the edge of the cockpit.
“What are we doing here?” I whispered to Muddy.
“The piano keys! Watch as the little dude tries it!” He jerked his head to the left.
I leaned forward and watched as one of the littlest campers, likely about nine, pulled himself up and out of his kayak cockpit and very carefully stepped onto the front of the kayak to his left. The remainder of us, in our kayaks, had to hold very tightly as the camper tried to walk the ‘piano keys’. He got to the third kayak along and slipped off the surface and into the water with a splash!
“Three!” Shouted Caroline over the cheers and laughter as the camper swam back to his kayak and struggled to get back in. “Three piano keys! Who thinks that they can beat Daryl?”
Another camper, just two down from me, thrusts his hand in the air. “I think I can do it!” He said. He looked about fifteen and was definitely taller and lankier than Daryl! The campers laughed and shouted at this. This ought to be good!
“OK, Mark, give it a try.” Said Muddy beside me.
Mark, biting on his tongue, fumbled trying to get out but finally managed to pull himself up. He turned right towards Muddy and me.
“Brace yourself!” Muddy whispered to me. “Here he comes.”
It all seemed like slow motion as Mark stepped onto Muddy’s kayak with his right foot pushing the kayak nose deep into the water and I saw as his foot began to slip on the slick wet surface. He flung out is left foot in an attempt to step onto my kayak, managing only to make contact with the edge before he started to fall into the water. Mark threw his hands forward in attempt to save himself on my kayak. I felt Muddy let go of my kayak, and as the vessel began to tip towards the left with Mark’s weight pulling it over, I let go of Muddy’s kayak. I took a deep breath as my kayak began to rotate towards the chilly lake water and I could see that the situation had now taken a turn (ha ha, get it?). Now I was up-side down in the water. Thank God I had emptied my pockets! Just as I had seen Caroline demonstrate on the dock, I pushed myself out of the kayak, freeing my legs so that I could kick to the surface. I came up quickly and gave my head a quick flip to get the hair out of my eyes. When I opened my eyes, I stared directly at Caroline as she stood on the dock with a look of complete dread. The look only lasted a split second though, as she broke out into a huge grin and clapped her hands.

“Your first wet exit! Well done! Well done!” We both laughed with relief.