I dragged my soggy, busted butt up the hill. Walking up all those steps to the third floor just about killed me. I went very, very slowly. I got up to my room and grabbed my towel, my toiletry bag and exchanged my running shoes for my flip flops. I was headed to the shower.

As I trudged down the hall I noticed a huge red bucket sitting at the end of the hall. Hmmmmm. I walked over to it and had a peek inside. Just a couple of ropes in it. Hmmmmm. I picked out the ropes and placed them on the book shelf. I dragged the bucket into the shower and hung my towel up on the hook. Then I ran back to my room and rummaged through my hockey bag that I had stuffed under the bunk bed. I found the bottle I was looking for. Then, I tore through our shelves and selected the most heinous appearing and/or funky smelling clothes that I could find on my shelf and my son’s. I ran into my daughters’ room then and grabbed some select items from there too. My arms were overflowing with nastified clothing as I scurried down the hall, dropping items as I went. I dumped the load into the bucket and then ran back down the hall to pick up the stray underpants and the shirt I had lost on the way. I ran back to the shower, tossed the remaining items into the bucket and closed the door. Screw the two pump rule on the sailor shower. I was gonna do some laundry!!

I poured some of my laundry soap on top of the pile and then shoved the bucket under the shower head with my foot. I pushed the shower button to start the water flowing and then I adjusted the bucket a few inches to get the proper alignment to fill it. It took three pushes to get enough water in there. So much for water conservation!

I plunged my arms into the water and did my very best imitation of an Irish washer woman. The water very quickly became soapy and brown. The shorts with sandy bottoms were the worst. What I would have given for a old fashioned wash board! I kept it up for a good five minutes before I pushed the bucket out of the way and had my shower, tossing my sports top and running shorts into the bucket and leaving all the clothes to soak.

I did my two push sailor shower and with that managed to get the initial layer of dirt removed from my feet. I made no improvements on the permadirt, true to it’s name. I quickly wrapped up into my towel and then returned to my laundry duties. I tipped over the bucket and let the sandy water drain out. Then I erected the bucket and pushed it under the shower again and pushed twice for the rinse cycle. I managed to get most of the suds rinsed out before I picked up each item of clothing and gave them a good twist over the shower drain. It was a valiant attempt at the spin cycle! I got to the bottom of the bucket when I noticed the layer of sand and silt on the bottom. I felt both accomplished and disgusted at the same time. The wash cycle was complete. Now for the drying.

I tossed my toiletry bag on top of the clothes in the bucket. I readjusted my towel to ensure that it was secure and all my bits and pieces were adequately covered. I pulled open the shower door and I stepped out of the shower to see if the coast was clear. It was. I dragged the bucket out of the shower and down the hall to my room. I managed to leave a skid mark, of sorts, along the carpet as I went. Ooops. At least it was clean water.

I dried myself off and got dressed. I cracked open the window and placed my little fan on the window sill and turned it on. Then I rummaged in my hockey bag again and found the bungee cord I had packed. I stretched it across the room from the bunk beds to the wall hooks and started to hang my fresh smelling laundry out to dry.

I was in the midst of hanging the last few items up when the kids came racing along the hall with Sammy and Anita following behind. The three kids were practically bouncing off the walls with excitement. They had had a fun filled morning. My son was chattering about his swimming lesson, learning to dive, and making sand castles. The girls had spent canoeing class capsizing the canoes and performing a canoe over canoe ‘T rescue’. From the sounds of it, most of the class had been spent underneath the overturned canoe singing Disney and N’Sync songs!

“Wow! Sounds like you had a fun morning! Were you really able to T rescue a canoe? That sounds pretty hard.”

“Ya Mum.” My daughter piped up. “We totally beasted it.”

“Beasted it? What does that even mean?”

“I think it means really good. I am not sure, but that’s what Nate told us.”  She giggled and shrugged.

Huh. They were defs learning more then just canoeing skills. 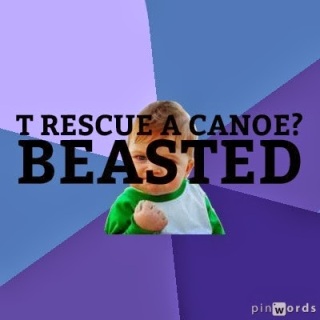