Before I left the health office I checked on Ted in the infirmary again. I woke him up to take his temperature. Still no fever. Still nauseated.

“You need anything from me?”
“No thanks. Just sleep.” Ted said groggily and then he rolled over on the bunk bed.
I jogged up the stairs to check on my kids and make sure they were ready for their instructions but they were already gone. I could tell they had been there cuz there were various items tossed all over the floor. I did a quick tidy of the rooms, and took the dry clothes down from my drying line, folded them and put them away. I grabbed my backpack with the first aid items and figured I start at the arts and crafts building today. But first I needed more coffee.
When I arrived in the kitchen a three man cleaning crew was doing a number on the dining hall. One was wiping down the tables, the next one was sweeping the floors and the last one was mopping the floor.
The coffee was all gone so I set about making a third pot of coffee. I watched as the first few drops of coffee started. I leaned back on the counter, crossed my arms and turned to the three guys who were working up a sweat.
“You guys are doing a nice job. Looks like you have it down to a science. I will put a good word it with Fr. Brian and see if I can get you a raise!”
“Ha! That would be awesome since we don’t get paid!” Malcolm raised his head from wiping down a table. “We pay camp!”
“Wait, what? You pay camp to do all this cleaning? That can’t be right?! You’re kidding, right?” I was astonished.
“Nope. No joke. We aren’t staff. We are just LIT 2’s, so we do all the cleaning. Half of us do cleaning after each meal in the dining hall and the other half clean all the bathrooms.”
Wow! A free cleaning service! Actually, no. A cleaning service that pays you. Pure brilliance.
“So what do you do the rest of the day?”
“We help with an instruction and then in the afternoon we have leadership training or team building activities. Yesterday we did the low ropes course and this afternoon we will be helping out at the all-camp.”
“YES! All-camp!” Scott hooted and pumped the air with his fist in the midst of sweeping. Alex gave a ‘whoop’ in response as he continued to mop.
“So this all-camp is a big deal, is it?”
“The most fun ever, pretty much.” Scott responded.
“Not including trip though.” Malcolm corrected him.
“That’s true.” Alex joined in. “Nothing is more fun that trip.”
“Oh, is this the ten day trip where you camp through the forest?” I asked.
“Yup. It’s part of the leadership training program and it’s awesome.”
“It is? You like that?” I was surprised.
“Oh man! It totally rocks!”
“What’s so great about it?” I was not getting it. OK, so camping is fun, but for these high school boys to be all pumped up about it, I figured I was missing something. 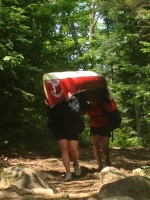 “Well we get to paddle through all these lakes and rivers all day long. We get to portage our canoes and our food through the forest. We get to cook our own meals. We get to sleep in tents.” Malcolm rambled off the list as he counted each of these off on his fingers.
“Most times we see moose or deer or bears. So, that’s fun!” Scott added.
“Oh and a camp fire every night. That’s pretty cool too.” Malcolm said.
“GORP is pretty awesome too.” Alex piped up. The other two boys responded with a cheer.
“What’s that?”
“Good old raisins and peanuts…but since we are a peanut free camp it is really just a bunch of things tossed into a zip lock bag. Cereals, marshmallows, banana chips, chocolate chipits and some raisins.”
“OK but what about bathrooms?” I asked cuz I really wanted to know!
“Oh every camp ground has a privy.”
“Like an outhouse?”
“Not really an outhouse per se, since there are like no walls at all. It’s more of just a wooden box with a hole in the middle of the woods.” I gave Malcolm a squeamish look. “It’s usually about a one minute walk from the campground area so it is private.”
“Riiiight. What about showers?”
“There are no showers. But you are in the lake so much during the day that you don’t really need a shower.” Scott told me. “Besides, you can’t use soap anyways, so why bother with a shower?”
“Excuse me? You don’t shower or bathe with soap for ten days?”
“Nope. Bears are attracted to the soap smells. They are also attracted to the food so that’s why we have to haul it up into a tree. And you only have one outfit the whole time too. So, by the time you come back to camp you are pretty earthy smelling!” Malcolm laughed.
“So let me get this straight: you paddle half the day and the other half of the day you do all this heavy lifting of the food packs and the camping supplies and the canoes; you poop in the woods while your bare butt, I would guess, is being eaten alive by mosquitoes; you don’t see a bar of soap for a week; you wear the same clothes everyday; you have to worry about being trampled by a massive moose; you have to bear proof your food; you eat something called GORP. And….you like all this?”
“I look forward to it all year!” Malcolm stood up straight and put his hands on his hips.”No lie, Nurse Anne.”
Scott walked over to me with an earnest look upon his face and put his hand on my shoulder. “Nurse Anne…I love tripping so much I could cry. I. Could. Cry.”
Wow.