We got down to the beach to discover three other families and several campers with counselors enjoying the waterfront. We pulled out a couple of folding chairs and plopped them down in the shade. The kids, now quite adept at ‘doing camp’, of course had their bathing suits on underneath their clothing. They pealed off the outer layer, tossed their clothes on the sand and ran into the water. I followed them down there and stood guard over my little guy who was thrashing about in the shallow end. The girls ventured out passed the dock and swam towards the raft under the watchful eyes of the three counselor life guards who were stationed to monitor the activities. Himself, who had peeled off his shirt, came down to the waterfront and stood beside me as he finished applying sunblock to his chest.

“They’re swimming is showing improvement too. I’m impressed,” he acknowledged.

“Daaaaad. We have learned, like, a gazillion things at camp,” I replied, mimicking Daughter Two and looking up at him with feigned disgust.

“They are paddling canoes, swimming like fish and even wiping down the dining table. I guess I thought their camp experience would just be glorified babysitting. I hadn’t considered that they might actually learn something.”

“And they are loving all of it. The instructions, the kids, the coun 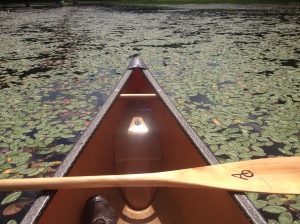 selors, the outdoors. Annnnnd, they go to bed entirely spent.”

“Seems like an idyllic way to spend the summer. Maybe you should sign up for the whole summer next year?” Himself softly jabbed my shoulder.

“Whoa Nelly! It’s idyllic for them, that is for sure. But it is a challenge for me. Not to mention that it’s volunteer work and the ‘housing’ situation is a little problematic.”

“Agreed. I don’t think I could survive that mattress another night,” Himself said as he rubbed his lower back and attempted a stretch. I laughed.

“Camp sure makes you appreciate the finer things in life! Like a mattress thicker than a half inch. And a good thick pillow…”

“And a private bathroom with a recent newspaper…”

“And being able to fix yourself a midnight snack…”

“Or a chilled glass of wine!” I added and let out a long sigh. God what I wouldn’t give for a glass of wine I thought as I eyed my first born child.