As we got closer to 4 o’clock, more and more campers trickled in as their families dropped them off at the beach and started their journey home. Most of the boys happily greeted each other. A few seemed quiet, sad, or withdrawn.

We watched as cars drove down the camp road, kicking up dust behind them as they pulled out onto the access road. The parking lot was emptying rapidly.

Drew, in a cloud of dust, chased his parents car as they picked up speed in an effort to evade him. His mother waved her hand out the window and shouted “It’s just six more sleeps, honey! Byeeeeee!” Shawn and Lydia quickly caught up to Drew and held him securely by the shoulders as he watched the car disappear over the hill. Drew’s head slumped forward and he shoulders shook as he sobbed. Lydia knelt down in front of him and gave him a hug as Shawn gently tousled his hair. My heart broke a little for Drew.

Lydia led Drew to the entrance of the beach and checked him in to general swim. Head down, Drew slumped over to his buddies sitting under the trees. He sat down cross legged beside Stewart who was busy reading one of his comic books. Drew rested his elbows on his knees and covered his face with his hands. Stewart gently patted Drew’s back and then slipped one of his comic books into Drew’s lap. Drew wiped his face, took a deep breath, cracked open the comic book and started to read. I watched as Stewart stole a sideways glance at Drew and tiny smile formed. I gathered he was happy that he still had his hut mate. Totes adorbs! I had to resist going over to them and giving them both a hug. Argh, the curse of a mother’s heart!

The beach was busting with activity now. Bear Hut boys were throwing around a Frisbee and chasing each other in the shallow end. My son gave up on swimming and grabbed my hand to lead me back to the chairs. I wrapped him in my towel that I pulled from my backpack and cuddled him in my lap. His little body relaxed and he drifted off into a snooze. Himself sat down beside me.

We both watched the girls on the raft. Some of the older campers were teaching them a diving game. There was plenty of laughter.

“A nice relaxing late afternoon at the beach, some fine camp cuisine, and then I will pack my bag and drive back to the city all by myself,” he told me as he sat back in the chair and buried his feet into the warm sand.

“Have you enjoyed your stay at camp?” I asked Himself.

“Well…for the most part…”

We were interrupted by the shrill sound of the buddy whistle. My son’s eyes flew open with a look of terror as he sat up straight. He looked around disoriented, paused, and then melted back into me, closing his eyes.

“Buddies! One, two, three!” The counselors shouted as the campers grabbed hands.

“Is anyone missing?” There was a pause.

“Two campers have not returned from Visitor’s Day.” All the campers began mumbling and looking at each other. Himself and I exchanged curious looks.

“I wonder if the raccoons are lunching on two escaped campers?” Himself whispered to me. I giggled.

I looked over to the buddy board. Lydia, Shawn, Bobbo and Anita were huddled together referring to a clipboard. Caroline and Muddy came running down the road with Mr and Mrs McDonald following at a fast pace. I looked around the beach and realized that Ted and Fred were the missing campers. Uh oh!

I grabbed my husband’s hand and gave it a gentle squeeze. “Prepare yourself for some excitement.”

“Do we get to see the raccoons?” Himself brightened.

“Something like that, darling.” I responded with a fake smile. 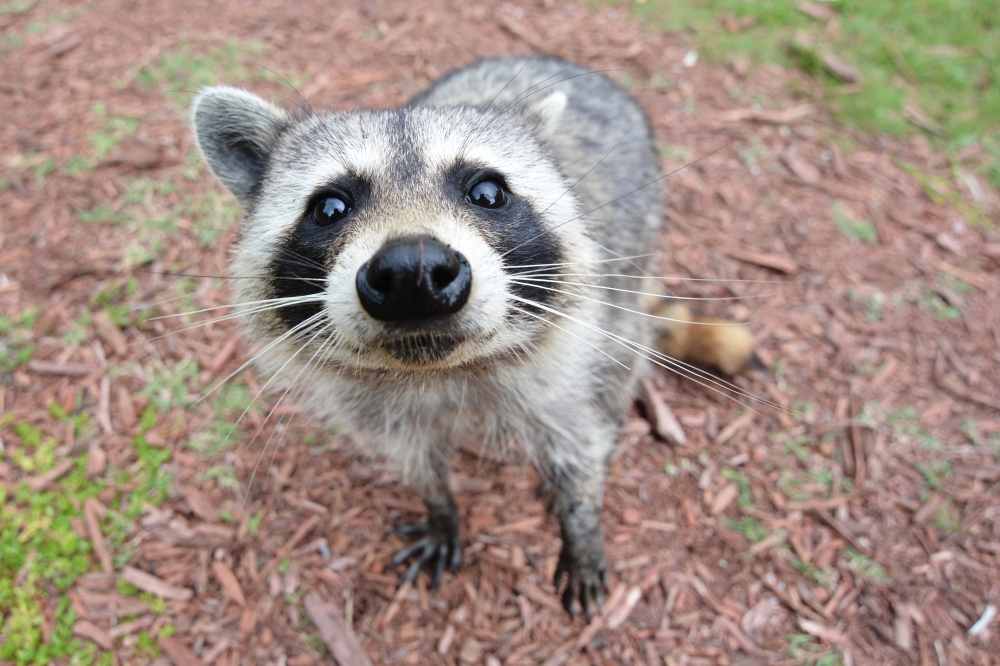 Hello Mr Raccoon. For lunch we will be serving ‘Escaped camper’.